The following is a step by step flow to help you migrate your existing Heroku mLab MongoDB instance over to ObjectRocket leveraging the mongodump and mongorestore utilities available in MongoDB. If at any time you have any questions or need help, just contact our Support Team.

Before You Get Started¶

Before you get started with the ObjectRocket MongoDB Migration Tool, you will need to do a few things in the mLab control panel.

You will need to capture some basic pieces of information about your existing Heroku mLab MongoDB instance. The migration tool will ask you for an mLab URI, mLab MongoDB version, and mLab MongoDB size. You can find all of this information in the mLab control panel.

It is very important that the same version is selected in order for the migration to be successful. Also, ensure that you are selecting a size from the ObjectRocket offering that can accommodate your current MongoDB instance size.

NOTE! Heroku will automatically select the appropriate region for the ObjectRocket MongoDB instance based upon the region where your Heroku app resides.

NOTE! If you need a larger size, just contact our Support Team and we’ll customize one for you.

Once you have successfully created your ObjectRocket MongoDB instance, you will need to get it configured correctly and ready for migration.

Open the ObjectRocket Control Panel with the following CLI command:

The ObjectRocket Control Panel will open to the Instance Details page. 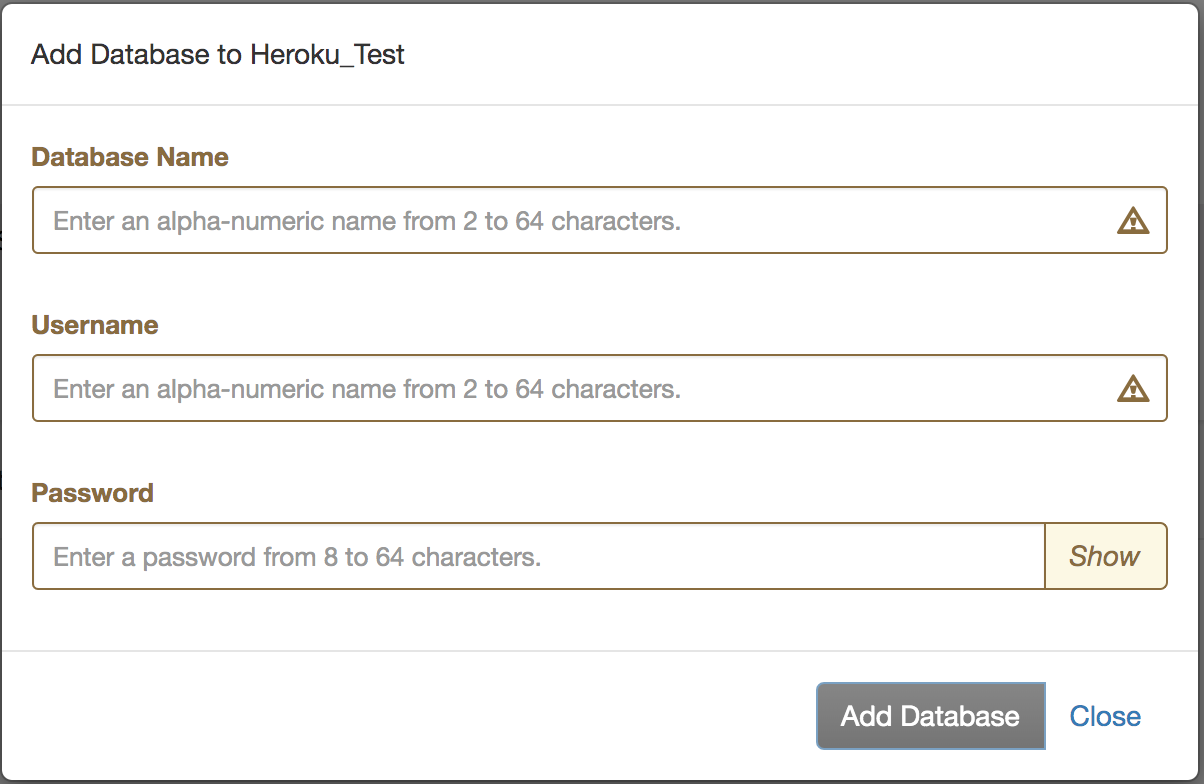 NOTE! In order to complete the migration, it is only necessary to set up an initial user for the database that is on the existing mLab MongoDB instance. Additional application users for the database can be added after database creation.

As a reminder, it is also necessary to locally replicate the config variables so your development environment can operate against the ObjectRocket MongoDB instance.

We recommend that you leverage a MongoDB package version that corresponds with the version of MongoDB that you are running. For example, if your mLab MongoDB instance is version 3.6, make sure that the package you use to run mongodump is MongoDB 3.6.

Perform a mongodump on your existing Heroku mLab MongoDB instance by running a command similar to the following from the system command line. Your values will differ.

This will create a database backup in the directory specified.

As an alternative, some instance types in mLab allow you to take a mongodump and download the file via the UI, by navigating to the Backups tab.

We recommend that you leverage a MongoDB package version that corresponds with the version of MongoDB that you are running. For example, if your ObjectRocket MongoDB instance is version 3.6, make sure that the package you use to run mongorestore is MongoDB 3.6.

Perform a mongorestore of the resulting mongodump on your new ObjectRocket MongoDB instance by running a command similar to the following from the system command line. Your values will differ.

Note! To reduce application downtime to as low as possible, you have the option to tail the oplog as part of the migration. By recording the most recent oplog operation before starting the mongodump and mongorestore, you can then apply operations from that point forward until you are ready to cut-over your application. Tailing the oplog reduces downtime by keeping the destination nearly in sync with the source until the application is stopped for the final cut-over. It’s recommended you refer to MongoDB Tailable Cursors documentation and your language’s libraries that support this type of process.

We expect that this extra option will rarely be needed and that most migration downtimes will be minimal. This step would only be needed for larger MongoDB migrations with very limited tolerance for any downtime. If you feel that you need this optional step and need help, feel free to contact our Support Team <mailto:support@objectrocket.com>.

If your heroku application runs the parse community server, update your parse server to use your new ObjectRocket database by setting either the DATABASE_URI or MONGODB_URI config var in your heroku app’s settings. Set the config var to be the value of the ORMONGO_RS_URL config var.

If your ObjectRocket database is using the mmap storage engine or if you don’t meet the retryable-writes prerequisites outlined here then you need to append &retryWrites=false to the end of your connection string.

Restart your application and any other processes that you stopped previously.

Note! You might want to take a recent backup and download the backup file via the mLab Control Panel before you destroy your mLab MongoDB instance.